Every now and then you can find apps in the App Store, where comments and ratings are questionable. Many times developers and their friends review their own apps and give them favourable ratings but never before we’ve seen it at this massive scale as with the #2 best selling iPad app Facebook-App Pica HD Browser: There was a huge gap between very positive and very negative ratings, the most prominent ratings are made by suspicious users. While the last known case where Molinker’s 1000 iPhone apps were removed for posting 42 fake reviews this appears to be in a completely new dimension of App Store fraud.

Most striking are 4 things:

1. The highest ranked ratings are made by users that also submitted high ratings for older apps of the same developer and no ratings for any other Apps in the App Store.
2. The wording of the comments is similar, none of them is longer than two sentences.
3. The high ratings were given on the day of release of the latest update.
4. There are two extremes: very positive and very negative ratings. There’s not too much inbetween, which is highly unusual for the App Store. 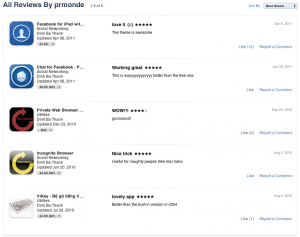 It’s obvious that the top ratings are usually made by the same users. This makes it highly likely that there’s some manipulation going on.
We’re a little unsure about how to take the ratings themselves but it looks like the developer faked all most of the 5-star ratings. A glance at the app itself we weren’t able to find a reason to rate the app with 5 stars though. It’s possible that the App was fully functional before the last update – CultOfMac and Macworld‘s ratings show the app was better before.

The app itself is rather poor and only stands out, because it features a very popular theme: A native Facebook app for the iPad is in high demand and Mark Zuckerberg is not yet willing to deliver what users are obviously asking for. Pica HD by developer Dinh Bah Thanh is an app-tized version of the Facebook mobile site. The screenshots in the App Store show something different, they also show themes we weren’t able to find in the current version of Pica HD. The description also mentions it makes use of Facebook chat – this was not the case. We expected more, especially at a price tag of $1,99. It’s possible that Facebook changed the APIs which results in a change of functionality: The app doesn’t work in the UK and the USA at the moment. Pica HD on 3Gapps.de